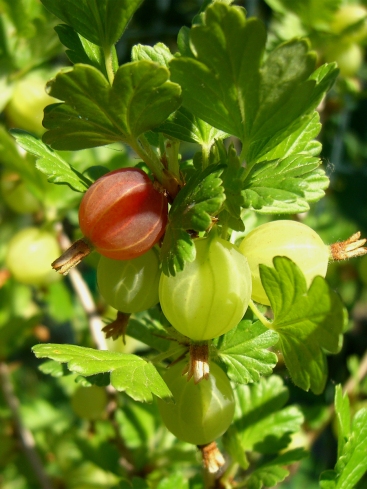 Gooseberries are sharp and acidic – the fruit is generally tart in May but may ripen more sweetly by July.

Native to northern Europe, gooseberry thrive in chillier weather and have been a feature of British gardens since the 1600s.  (RHS, The Garden, June 2016, pp.73-75).

As a general rule gooseberry:

Netting: People recommend different approaches to netting. One view is that birds enjoy ripe gooseberries but net plants as late as possible because the birds also help control bugs. Another view is that plants should be protected from birds by netting as soon as spring growth appears, as some birds such as bullfinches like to eat the developing buds.

Pruning: Growing gooseberries as bushes (as opposed to cordon) is easiest. Gooseberries are formed on branches which grew in the previous and older years. However, branches older than three or four years old will become unproductive so these are best pruned out.

Prune after its first growing season in autumn/ winter.  Choose a day when the weather is forecast to be dry in order to reduce the risk of fungal infections.

In winter shorten leaders by a third and cut back laterals (side branches) to two buds.  Remove branches growing in the centre of bushes to create an open ‘vase’ shape.  Prune again in summer – reduce all  new growth sideshoots except the main growing stems to five leaves.

There are three simple rules for successfully pruning a gooseberry bush.

Overall, gooseberry bushes benefit from quite harsh pruning. Over-pruning is possible but unlikely, even then the plant will quickly recover.

Harvesting & Preservation: Carefully harvest the gooseberries as when ripe they can easily burst.  Fruit can be bottled for use over winter, by selecting fresh firm fruit. Wash them, top & tail, and pack into sterile jars and bottle in syrup.

If you are making jams, pies or tarts its best to pick slightly under-ripe gooseberries around June.  Leave the rest to ripen which can be picked around late July when they are swollen and sweet.

Hinnomaki Red Gooseberry is said to be a truly an outstanding variety from Finland, with superb flavour, high yields and beautiful red coloured fruit that has tangy skin and sweet flesh.

Plants grow upright and are mildew resistant.  The sweet berries are good for eating, desserts and preserves.

Hinnomaki Red are self-fertile. Plant between February-June or September/ October in full sun or partial shade.

Hinnomaki are easy to grow, tolerate most soil types, and work nicely as hedging, with lobed leaves that turn red in the fall.

Matthew donated a couple of gooseberry bushes summer 2019 and we planted them in the back patch.  They are setting fruit and look to be green gooseberries, 1 June 2021.