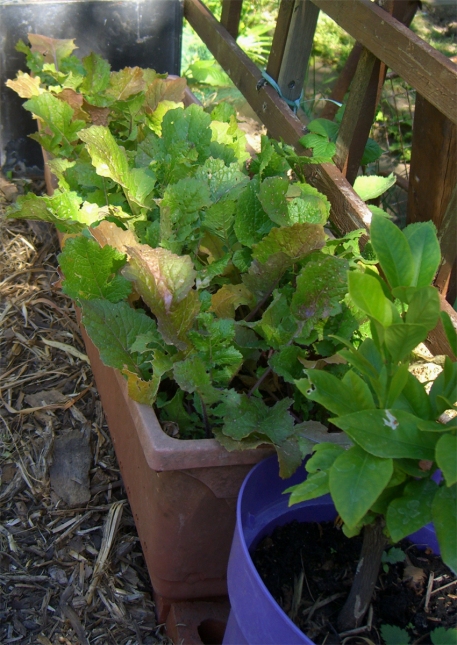 For early turnips, sow ‘Atlantic’ or ‘Milan Purple Top’ under cloches in February and other cultivars from March to June.

Thin turnips grown for their roots until they are eventually 6 inches (15cm) apart for early crops, or 9 inches (23cm) apart for main crops.

Water during dry weather or the turnip roots will be small and woody.

Harvest early turnips when the size of a golf ball for eating raw or the size of a tennis ball for cooking (or in other words, from May to September.) To harvest simply pull out of the soil, as you would a radish.

Harvest main-crop turnips from mid-October onwards, when the size of a golf ball.

Turnip tops can be harvested in March and April.  A top tip is to leave the plants to re-sprout as several cuts can be obtained.  Turnip tops can be eaten, steamed for a minute or two.  Younger turnip greens can be added to salad greens.

“Turnip greens make for good eating.  Chop the washed leaves and thinner stalks, then cook in very little water, as you might spinach.  Toss with olive oil, or melted butter and the merest squeeze of lemon juice.”  Nigel Slater, Tender Volume I, p.601

‘Purple Top Milan’: Summer or early: Flattish roots with purple markings and white flesh. It’s tender when young and early maturing, with an excellent flavour.  We sowed these in spring 2020 in a plastic planting trough.

“Turnip can be white, ivory, red or golden.  It can come with its shoulders brushed with lavender, moss green or the hue of a wine stain.  For a brief point in its life, it is small enough to hold in a bunch, like a posy.  It can be cooked in butter and sherry, mashed with cream and butter or given a glossy coat with sugar.”  Nigel Slater, ‘Turnips,’ Tender Volume I, p.599

“The Romans knew the turnip, though hardly worshipped it, and part of its problems may stem from the fact that it has always been used as animal fodder.  It has taken me most of my life to appreciate the turnip.  ….  There will always be a place in my kitchen for the turnip.” Nigel Slater, Tender Volume I, p.600.