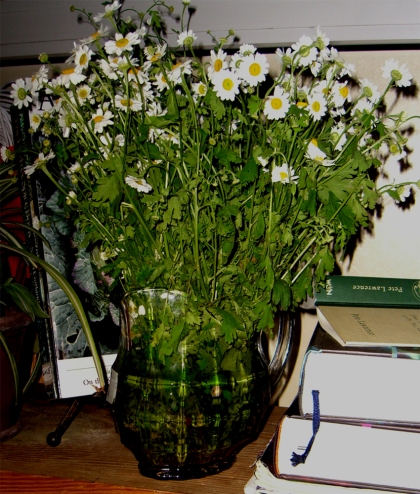 Feverfew in a large pitcher vase. May 2020

Feverfew is a member of the aster family (Asteraceae) and is native to southeastern Europe, and is now widespread throughout Europe, Australia, and North America, where it grows in zones 5-10.

Feverfew often behaves like an annual in cooler zones, but is a perennial in some areas such as with us.  The plants remain throughout winter but in a smaller form, exploding into vigorous growth and flower in mid-spring. 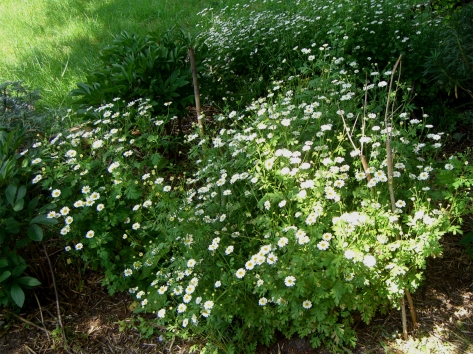 These plants grow anywhere from eight to 24 inches tall (depending on their location and habitat), with a width of about the same range.  Plant in sun or semi-shade in well drained soil.  Deadhead regularly to encourage continuous bloom and also to control it from self-seeding too vigorously.

Having moved seed heads around from the woods to the back patch, we now have patches of these delightfully cheerful delicate-daisy-like flowers all over – from the meadow, the half circle bed, and out into the back patch with several large clumps under the large cherry tree.

(In this respect feverfew is similar to mourning widow and California poppy in terms of self-seeding and the relative ease of simply dropping dead head cuttings into places you’d like to see flowers in the future.  It’s that easy!)

Feverfew has a few interesting properties.  As the name suggests, the plants are used medicinally in folk medicine to treat headache, migraine and digestive troubles (mainly using the leaves but sometimes also the flowers.)

Another interesting fact is that this plant has a strong citrus-like aroma that repels bees, so it is recommended that gardeners do not locate T. parthenium near plants that rely on bees for pollination.  Feverfew can self-pollinate and doesn’t require help from pollinators.

According to Maggie Campbell-Culver, feverfew arrived to Britain from south-east Europe in the first century AD and is listed as an “incomer” plant of note by Abbot Aelfrid in his The Glossary to Grammatica Latino-Saxonica which was written 995 AD.  This plant, like lemon balm, “has acquired native tendencies since its arrival, is the wonder plant which gives relief to migraine sufferers…  Its Latin name, Tanacetum parthenium, reflects the medieval Latin word for our own native tansy…” (The Origin of Plants, p.41)