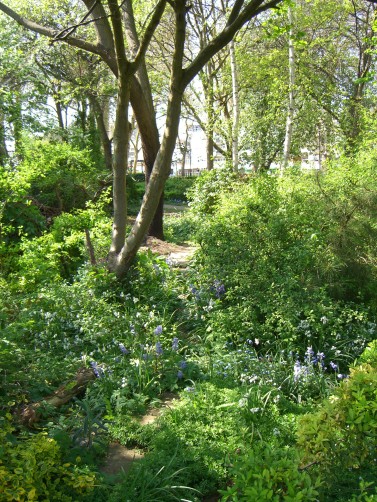 The woods, looking magical with wild onion, bluebell and forget me not in flower.  The tree canopy is coming in but is not yet complete.  28 April 2019.

We are in full lockdown in London (which started 20 March), but thankfully can find refuge and calm in the woods, the back patch and also our allotment.

Wild garlic and wild violet are in flower.  The violets have been flowering in the woods since March and have a long flowering period.

The daffodil are fading/finished with a few late exceptions, as are also the grape hyacinth, tulip and the hyacinth.

By end of March the blackthorn and yellow plum in the woods were finished flowering.  The big cherry in the back patch was in it’s glory of bloom from mid- to late-March.  Like last year, the smaller cherry went into bloom just as the larger cherry was finishing and starting to set full leaf canopy.   The smaller cherry is still just about in flower in early April 2020.

The daisy in the woods (under Michael Palin’s little oak tree and in half circle bed) are setting flower heads by the end of the first week of April.

There are already pale pink roses in bloom on the Ayla family rose patch in the half circle bed.

Wood violet are still strongly in flower in the raised beds along the building (with the black currant bushes).

Self-seeded honesty has come into flower in the middle beds of the woods, early April.

The balsam poplar is in full leaf now, but overall tree leaf canopy is still coming in. 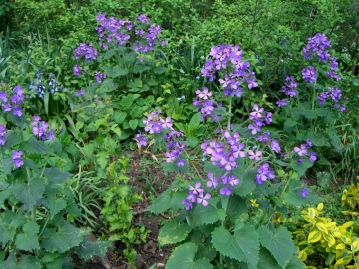 Wood violet are still in flower.

Hyacinth have now faded, and many daffodil are also finished – with a few late arrivals coming into flower.

In the back patch railway path beds the wild garlic are in flower.

The struggling camelia bush in the back patch is also coming into flower – first arrivals showed up 31 March 2019.  We plan to fertilise the camelia properly to see if we can get it back to health.

Some back patch yellow calendula are in flower – as are the calendula growing in the meadow area of the woods. 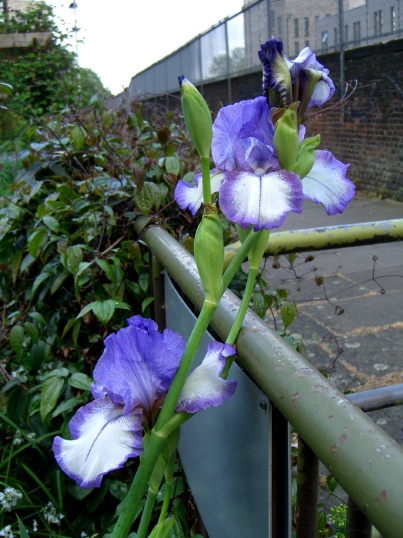 My gardening notes state that iris flower in May, but these have come into flower in the last week of April.  Glorious!  The flower spears stand taller than the metal railings.  Almost as tall as me.

The blooms are quite short-lived, lasting a few days only.  But when blooming they are magnificent.   A glorious counter-point to the bleak brick & metal mesh wall of the railway path.

I should divide this clump later in the summer, once flowering stops – would be lovely to have a complementary clump of iris elsewhere along the railway path perennial flower bed.  Things are already crowded, but I can transplant some of the crocosmia from the existing bed (and move to the woods’ meadow area), to make room for more iris farther down the patch.