These plants are also known as Culver’s Root and belong to the Plantaginaceae family of plants.

Native to American meadows, viriginicum when mature can grow up to five feet high, with ‘candelabra’ forms of spiked flower spears.

They have been grown in Britain since their introduction here in 1714 from North America (Maggie Campbell-Culver, The Origin of Plants, p.301).

It grows in any moist soil in full sun or partial shade.

It is rated as ‘Perfect for Pollinators’ – eg bees, butterflies, hoverflies etc.

They do best when planted in a deep, rich soil that does not dry out.

These plants are perennial and may take a year or so to fill out, but when they have these are easy to grow and don’t require dividing often.  They tend to grow in clump formation and are easy to divide, if needed. 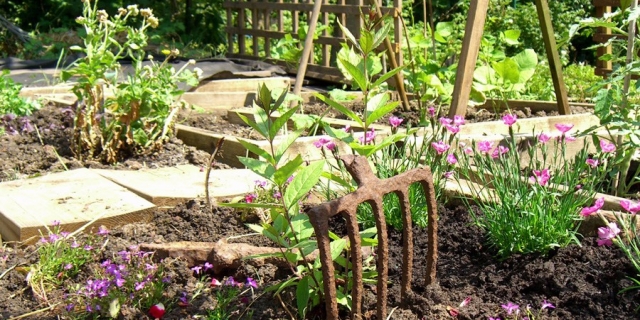 The perennial flower bed, with virginicum in pride of place, by early July had companion planting of dianthus (‘pinks’) and lobelia. (Summer 2018)

In early April 2020 it became clear that the patch where the virginicum and dianthus were planted is actually a very valuable food growing space for crops such as spinach, swiss chard and other leaf crops (being the spot where the mizuka asian lettuce has created a self-seeding perpetual patch.)

Greedy for more food growing space, I transplanted the virginicum into the flower bed in front  of the hedge that borders to H’s plot – and also moved the dianthus*.  The virginicum transplanted very well (see photo above from April 2020).

* I moved the dianthus to under the rose arbor and also into the herb patch with marjoram and thyme.