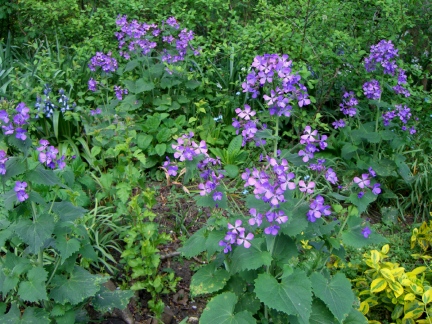 Honesty (Lunaria annua) is an old-fashioned cottage flower that belongs to the mustard family (Brassicaceae) and is native to Europe.

The Latin name lunaria means moon-shaped, in reference to their distinctive seedpods.

Honesty is also known as ‘moneywort’ and ‘moonwort’- a reflection of the pale translucent coin-like seeds.

Grown partly for its fragrant bright flowers in spring and early summer, it is also valued for its seed-heads, which are oval and translucent, gleaming with silver light.  The flowers are purple or white cruciforme (cross shaped).

Lunaria are biennial, which means that the plant grows from seed one year, and flowers in the next year.  The plants grow into large, well-branched plants in its second year, with distinctive heart shaped serrated leaves.  After flowering the attractive seedheads appear. Left to their own devices they’ll seed freely around the garden.

Honesty can survive in full sun to part shade, making it suitable for wildflower meadow or garden, or for cultivation in shady, dappled woodland areas, such as it is situated in the woods.

If grown in a happy spot honesty will freely self-seed, just as the little beauties in the woods have done.

Another member of the Cruciferae family also thought to have come into our gardens some time in the thirteenth century is the plant especially designed with children in mind, Silver Pennies or Honesty.  The plant has been with us (p.96) so long and is so instantly recognisable that it has a string of vernacular names, including Sattin-flower, Silverplate, Prick-song-woort, Judas Pence, Shillings, Two-Pennies-in-a-Purse and Money-in-both-Pockets!  Just to add to the delights, it is known in France as Herbe aux Lunettes, or Spectacle Plant.  However, its Latin name, Lunaria annua, recalls the moon, and that is just what the round silver seed pods look like.  It is a very widely spread native of Europe but is believed to have originated in Italy.  Both Sweet Rocket and Honesty feel so at home here [in Britain] that htey have crossed the divide and gone native.” The Origin of Plants pp.95-96