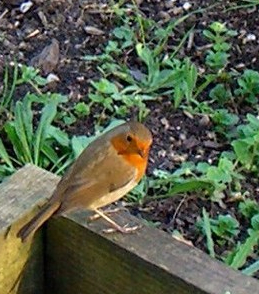 The UK’s favourite bird – its red breast it is familiar throughout the year.

Males and females look identical, and young birds have no red breast and are spotted with golden brown.

Robins sing nearly all year round. They will sing at night next to street lights.

Despite their diminutive appearance, they are aggressively territorial and quick to drive away intruders.

Robin are known as gardener’s friends as they often follow you around the garden, poking around in any soil you might have disturbed moments after you’ve moved on to a new patch.

On average, robins only live a couple of years, but a few reach quite an advanced age. The oldest known wild individual was 11 years 5 months.

There are plenty of robin that live in the woods and back patch.  There’s also a little robin at the allotment.

Most nests are located on or near the ground in hollows, nooks and crannies, climbing plants, hedges, tree roots, piles of logs and any other places that provide a fully concealed cavity.  Robins are famous for nesting in all kinds of unlikely locations, including sheds, kettles, boots, hanging baskets, under car bonnets, in farm machinery, etc.

The cup nest, built by the female alone, is made of dead leaves and moss, lined with hair.

Courtship feeding is a very prominent activity, and the male can supply more than a third of his mate’s food intake during nest-building and egg laying.

This extra food is important and can make a difference to the clutch size, particularly since a complete clutch represents about 90 per cent of the females total body weight.

Normal clutch size is 4-6, with one egg laid each day, usually early in the morning.

The birds are very sensitive to any disturbance during the nest building and egg laying, and will easily desert the nest if they think that the nest has been discovered.  Unless the birds are used to people, it is best to stay clear of the immediate vicinity of the nest until the incubation starts.

Once the clutch is complete, incubation is by the female alone for 13 days.  The shells of the hatched eggs are removed immediately from the nest by the female, who sometimes eats part of them for extra calcium.

The chicks hatch naked, and are totally dependent on their parents for food and warmth.

Unlike nest-building and incubation, both parents look after the nestlings.

Feather growth becomes evident with the appearance of quills at 3 days of age. By 5 days the eyes start to open and they are completely open by 8 days.

By this time, rows of feathers will start to appear on backs and flanks. The body is more or less feathered by 10 days.

Flight feathers are the last to grow, and as the chicks fledge at 14 days, they will not be able to fly for another couple of days.

The young are tended by their parents for up to 3 weeks after fledging.  Frequently the care of the fledged young is left to the male, while the female prepares herself for the next nesting effort.

Robins have two broods a year.  Three successful broods a year is not uncommon, and in a good year even four are known.

These multiple broods result in a long breeding season, and nestlings can be found until late July.

There are considerable losses during the egg and chick stage only about 57 per cent of eggs from completed clutches result in fledged youngsters.

Despite being fiercely territorial against their own kind, robins do not normally bother about birds of other species near their nests.  The parental instincts of robins are highly developed, which has led to the frequent reports of robins feeding the chicks or fledglings of other species.  The most regular recipients of this unexpected care are song thrush, blackbird, spotted flycatcher and willow warbler.

For more information see the RSPB