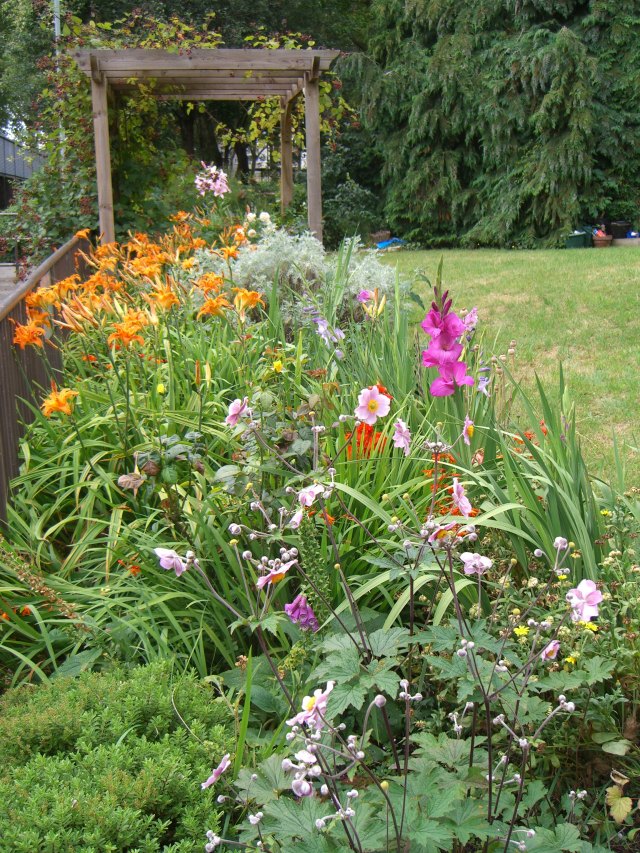 Pink flowering Japanese anemone in the back patch, shown interplanted with foxglove, gladioli and crocosmia.  Farther down the bed are day lily, yellow rose, artemsia and pink asiatic lily.  Growing on the pergola is a wild blackberry.  (Photo by G, Summer 2019)

Japanese anemone are spectacular easy-care plants for the garden, and are also sometimes called ‘Windflowers’, because their flowers stand high above the plant and the blooms dance and bob in the breeze.

Although native to China, they have been cultivated for hundreds of years in Japan, hence the name given to them.  The Scottish Victorian plant hunter Robert Fortune (1812-1880) discovered it growing in a cemetery in Shanghai and introduced it in Europe in 1844.

Today they have been renamed Anemone hupehensis, or Chinese anemone – with hupehensis indicating that it is native to the Hupeh province in eastern China.

They are deciduous clump-forming perennials.  When in full bloom they can stand up to three feet tall.  Many garden websites recommend them to add colour in late summer, when most other summer flowering plants have finished blooming.  They have an additional super-power in that they remain in bloom for a long period, flowering over 6 to 8 weeks.  Wonderful!

Once established they can be left to themselves, and if happy will spread on their own.  They can be propagated by divisions in spring and autumn.  Root cuttings can also be done, but we’ve no need for any of that fussiness as they’re doing fine spreading all on their own.  The only tending they really need is to cut them back after flowering at the end of the summer – easy peasy!

Monty also warns that sometimes anemone don’t do so well in their second year, and often take time to settle in. But they are long-lived plants with a long flowering period, so well worth the patience.