Southern Green Shield Bug (aka Stinkbug): Nezara viridula – Known since 2003 in southern England, the Southern Green Shield Bug is originally from Ethiopia.  We spotted one on our runner beans mid-September 2019.  It’s also been at the yellow raspberries. A little online research revealed that neither biological nor chemical controls were advised. So what to do? 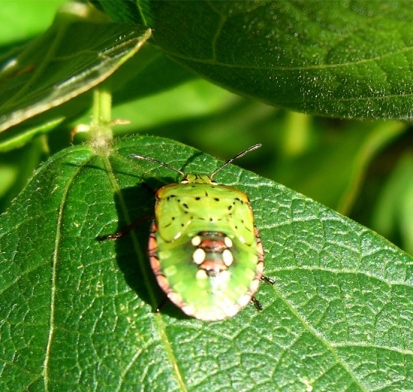 The gardening websites we consulted remained mute on the matter.  One website offered consolation that the official view as to whether the stinkbug is a pest is still being decided, and that in any case crop damage seemed minimal (in other words, easy to ignore) and only late in the growing season (from August onwards).

Hhhmn…  I leave it to individual gardeners to decide in the face of it all what to do about these beetles.  Some may do nothing at all, seeing them as little bugs just trying to make their way in the world.  Others may resort to crushing them on stones with a trowel – think of it as a bird’s ‘ready-meal.’

Whichever way you choose, be sure that nature, in the end, will win.