Snowdrop, which come out early January, remain in flower in shaded areas throughout February.

Woodland cyclamen flower in February, as do early flowering vinca and wild violet.

Crocus start to come out mid-February.

February 2019 we added 3 bags of wood chip mulch to the allotment paths to make them safer – the clay was exceptionally slippery!  Plans are afoot to do something similar with hay obtained from the usual annual Oak Village June street party.

On warm days queen bumblebees may be seen searching for early flower pollen and nectar.  Early butterflies such as peacock may also be seen.   We saw a queen bumblebee feasting on the sunlit crocus lawn in the last days of February 2019 during a short three- to four-day heat wave where temperatures reached 16 degrees.   This picture shows a bee on a crocus in the woods’ front lawn in late February 2019. 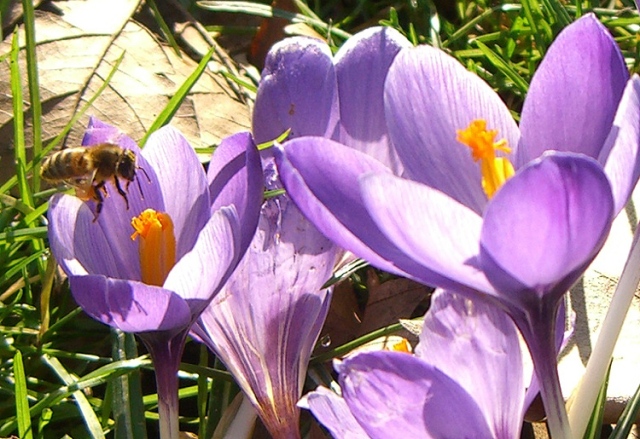 This is also the time when frogs and toads start to arrive at ponds to spawn.