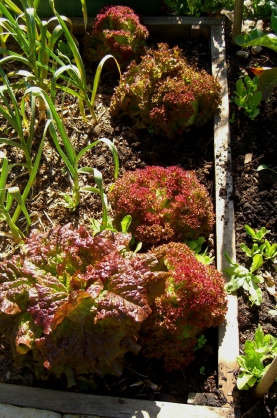 Inspired by the crispy, fresh tastiness of our garden grown red curly lettuces, which have provided us two delicious main meals in the past week, I decided to dedicate a little bit of time to ensuring we have a steady harvest of tasty leaves throughout the summer.

About two weeks ago I started some seeds in a tray in the growing shed, and have now planted those tiny tender seedlings out into the soft new manure-rich soil of the new raised bed.

Into the front of the new raised bed are sunk two large pots of green-fruiting zucchini (from which we’ve already eaten three tiny zucchini) and so, under the shade and with the water overflow from the squash, are sheltered some lettuce.

Let’s hope they survive the eventual onslaught of slugs. 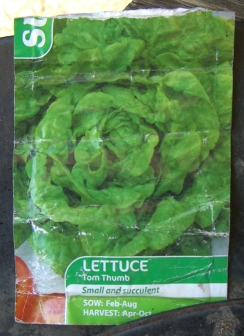 The little seedlings were started with ‘Tom Thumb lettuce’ seeds, which can be grown from February to August.

As these did well I also started new trays of lettuce seed of these, as well as a tray of Cos lettuce.  Wouldn’t it be lovely if they all came up and grew!?  I hope so.

Another bonus that came to us from the garbage was a new wicker growing basket.  The day before I’d spied a wicker laundry basket beside cardboard boxes outside a ground floor flat.  Even though my magpie instincts urged me to saunter over and retrieve it then and there, it was still right on someone’s doorway and that didn’t seem the right thing to do.  So the next day I of course cast my eyes down the doorways, but the basket was gone.  I decided to take the chance that it had been placed in the building’s locked rubbish room, so took a detour from unlocking my bike and went to quickly check the garbage room.  And there it was – in fairly good shape, looking almost new, with a few chunks of weave missing on one side.  So scooped it up and brought it straight to the allotment. 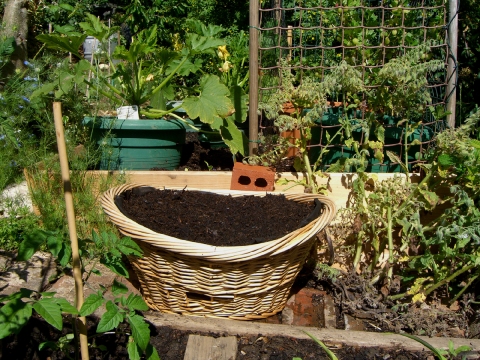 After being lined with black horticultural fleece and filled with bagged potting soil, I watered it thoroughly (until water ran out the bottom) and then let drain for a few minutes before direct-seededing some more Tom Thumb lettuce.

Lettuce plants are not as a rule deep rooted, so are perfect candidates for growing baskets and pots. I’m so pleased with this new basket.  It’s cute as a picture and fits perfectly into the far end of the brick path.  It’s quite small so that even full of soil it’s not too heavy to be easily moved to a shadier or sunnier spot if needs be.  Magic!

I’m also very happy that the Tom Thumb lettuce seeds have proved themselves viable.  I’m going to keep sowing until the packet runs out. 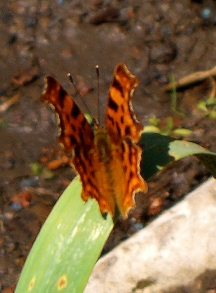 In this respect the Cos lettuce that I seeded into trays is more like a test batch – hopefully they germinate.  Only time will tell.

I’m also not sure at this point whether to have lettuce seed trays in the shed, which is now hot and humid so could be too hot for cool loving lettuce.  Don’t know.

Must continue to experiment and may start a tray of Cos seed that I leave outside the shed as a control to compare with the shed-grown trays.

There was interest and high drama with the wildlife yesterday.  Butterflies flitted on the warm summer breeze, and the garlic bed was visited by a handsome Comma butterfly.  A large dragonfly flew by on patrol, zooming at height over the allotment plots.  Birds chirped and all seemed serene and idyllic.  A perfectly peaceful summer’s day… 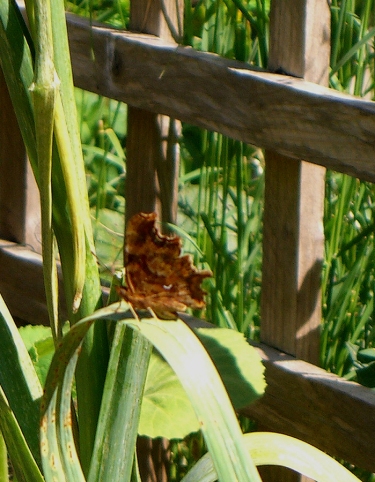 And then we took a look in the pond.  It was all a bit brutal, to be honest.  There was a cluster of large tadpoles at the bottom of the waters, hoarding around and savaging at something – like miniature sharks on a feeding frenzy.

On closer inspection we realised with some degree of horror that what they were eating was a tiny, perfectly formed frog.  Yikes! Their whole little tadpole heads were moving up and down, a bit like Pacman if you’re old enough to remember that computer game.  Chomping, chomping, all of them swimming around, circling, chomping.  I could only think of a frenzied shark attack – albeit in miniature.

Flying frogs from above!  Was it murder?  Tadpole cannibalism of their older silbings?  Or maybe that little frog had been sick or poorly, and was now being consumed by his siblings in mother nature’s remorseless ‘waste-not, want-not’ ways?  Who could know? 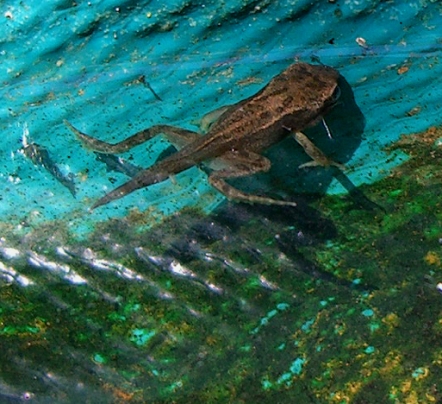 Looking around, we spied many tiny, perfectly formed but fully alive froglets.

They are a marvel to behold – perfect in their juvenile miniature form.

Many had already shed their tails, but some had vestigial tails.

At least now these little froglets can hop and shimmy up the side of the pond and get out of the water, to escape their hungry younger siblings.

The newts were also active, and thankfully more peaceful than life at the bottom of the tadpole pond.  It’s lovely to see the newts swimming freely in the pond, so sinuous and graceful when they move.  We’ve seen three at once – two larger newts and a much smaller little dude that the big dude has nicknamed Sir Isaac Newt, Jr. 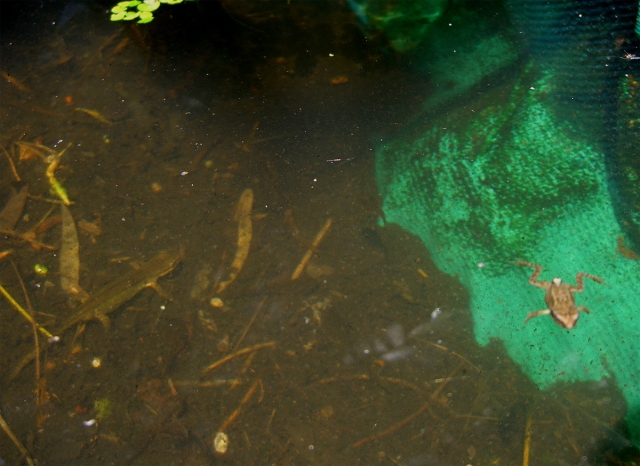 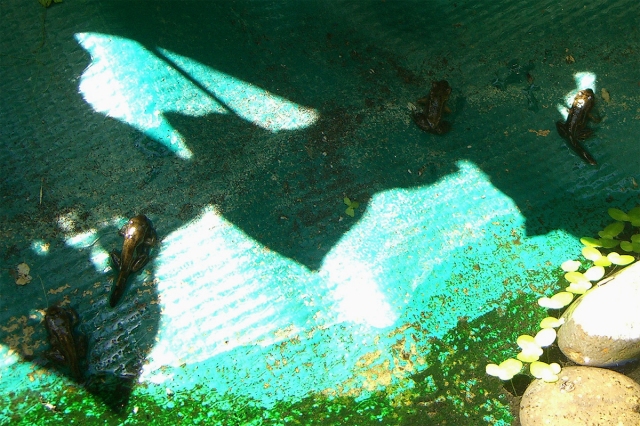 A tumbleweed from Canada who's been living in London for twenty or so years.
View all posts by smallPaws →
This entry was posted in allotment journal, pond life, wildlife. Bookmark the permalink.