out of the blue, a dream come true

Last week I had a call out of the blue.  Are you so-and-so?  Do you still live in on Sesame Street?  It was the coordinator from the allotment cooperative I’d signed up to join over 10 years ago.  We chatted briefly and arranged to be in touch in coming days.  It was an illuminating conversation: yes, my address is the same, yes my work email is the same, yes my mobile number is the same.  Has nothing changed?, I wondered.  And yet in those ten years much also has changed.  In fact, it feels like everything’s changed – all the most important things in any case – but evidently not.

She warned me: it’s very overgrown.  It will be a lot of work.  That’s the way with allotments that come available.  They do so because people have let them go.  And she knew it was late in the year, really, for a vegetable plot.  Part of me felt it mad to undertake.  The woods and back patch here closer to home are more than enough gardening for anyone, really.  But I was intrigued even if somewhat wary of taking on even more.  I have enough to get on with, without adding more to the task list.  So many projects left dangling, undone.  (The sewing, the glasswork, the general tidying.) 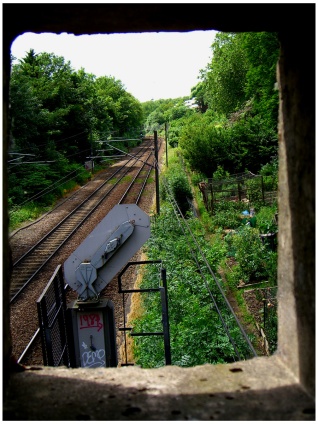 Even so, when she rang on the bank holiday Monday morning, I couldn’t help but agree to meet her on site later that afternoon.  I couldn’t come sooner as I’d committed to go to D’s birthday party mid-day.

When I set off I was steadying my nerves and preparing to say that I would love to have a plot, but would prefer one that was clearer, or smaller, or bigger, or something of the like.

But when I got there and looked around, it seemed small enough to manage, and really quite sweetly situated.

It’s I guess a half plot, right at the back of the stretch of ground.  There’s two other allotment sites in front of it, and it’s up a sloping bank of ground, but with terraced flats.  The water cistern isn’t too far away.  At the back is a tallish lime tree that gives partial shade at the back.  To the side is a metal frame arbour covered in a small red blooming rose.  I couldn’t help it.  I said yes and paid up immediately.

A full £30 a year, with £5 for the key.  A done deal.  I signed an agreement sheet on the understanding that the ‘rules’ will emailed to me.  And that was that.

I spent two hours pulling at weeds, trimming the holly tree as far as I could with my small secateurs,  The back part of the plot slopes upwards and is completely overgrown with blackberry vines.  I sliced my finger on a thorn – my bleeding a first initiation to the allotment.  (I made a mental note to bring a water sealed first aid kit up to the allotment plot, along with the other necessary tools, like garden fork and spade).

So that’s that.  Late May 2018, and we’ve got a seriously overgrown allotment plot to work on – situated just along the edge of Hampstead Heath and the overground railway line.