The sea holly, which had disappeared during the heat wave last summer, has re-appeared.  The big dude’s delighted.  I’d protected and marked the spot with a broken tool handle, which we’ve now removed.  It’s likely that the very heavy clay soil it’s planted into is not good for it.  As coastal plants they would naturally prefer well draining, gritty ground.  We may adjust the conditions by adding some grit around the base of the plant.  And we’re also not going to over-water it.  With any luck it will come out stronger and more resilient than ever. 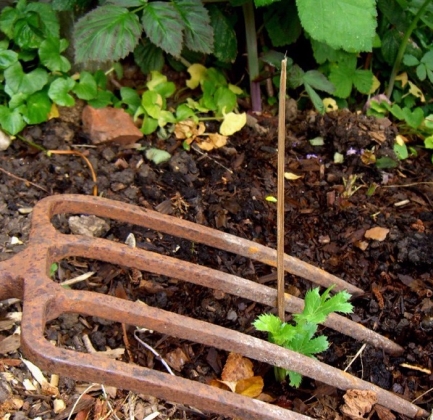 The great Malink had been very vexed when it disappeared last summer, and repeatedly threatened to dig it out.  But I always cautioned against it – on the principle that the plant might come back, and also that even dead roots keep weeds out.  And here we are: the super-powers of plants!

In the top left corner you can see the small glossy leaves of wild celandine growing in under the rose hedge. Probably considered by some a ‘weed’, I love celandine – low growing, glossy, found in shady spots that are otherwise empty of interest, that sport bright cheerful yellow flowers (also glossy!) in the early spring.  So I’ll leave it growing. 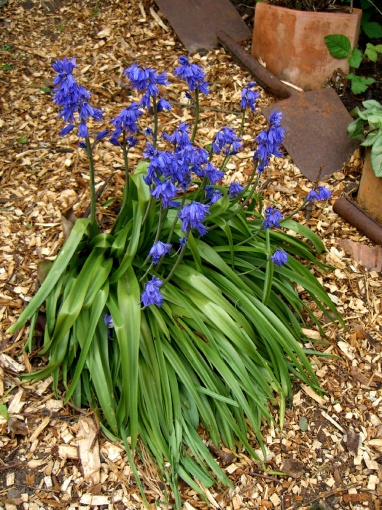 Another plant growing on it’s own which we’ll leave in place is the clump of bluebell.

It grows in what otherwise is naturally a ‘path’ running along the side of the damask rose fence that is edged with terracotta pots (just visible in this photo).

In addition to the pots is a line of rusted old garden tools – all found buried under bushes and revealed in the process of clearing the plot.

The whole of the top level has been generously wood chipped to stop it being slippery in the rain – the ground is solid clay and gets slick when wet.  Thank goodness for all that free wood chip arranged by the allotment committee. 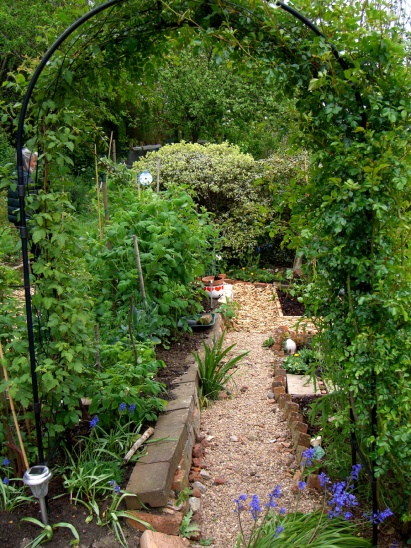 We spread out the bags of garden pebbles that I found on the side of the street yesterday. They look perfect and add a nice finish to that stretch of path.

The path is softened by the plants growing into the path – a clump of bluebell at the start, under the rose arbour, a small clump of yellow iris farther along, and also a self-seeded calendula sitting on the other side of the herb bed.  The raspberry patch, as shown, has exploded into vigorous growth.

The final little bit of the gravel we spread at the very border to the next allotment, at the end of the jasmine border.  I’m civilising that edge, with H’s permission of course, removing grass, ivy, bindweed, etc on all sides. 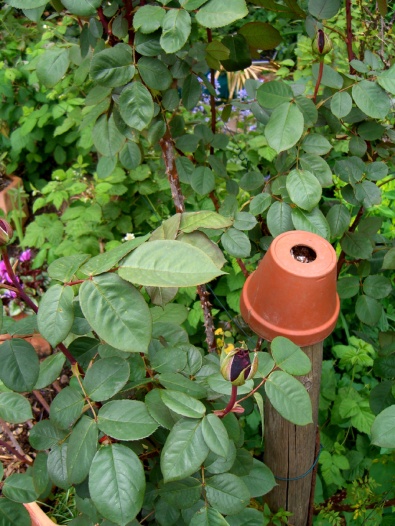 The damask rose on the side at the top terrace level is already showing well developed flower buds.  I cut one to bring home.

Two of the three wood violet clumps transplanted from the woods have survived.  I’ll try to transplant a few more in the coming weeks.  (And speaking of cut flowers, we already have in vases inside cut lilac – in flower for the past week or longer – and the very first of the crimson peony (cut from the raised side bed, where it grows mixed in with the black currant bushes.)

The large clear plastic tub I picked out of the garbage earlier this week fit perfectly over the three rose cuttings, which are still growing and looking healthy.  Conditions have been breezy and cool, so having a cloche is a good idea.  And great to use something otherwise heading straight to landfill. 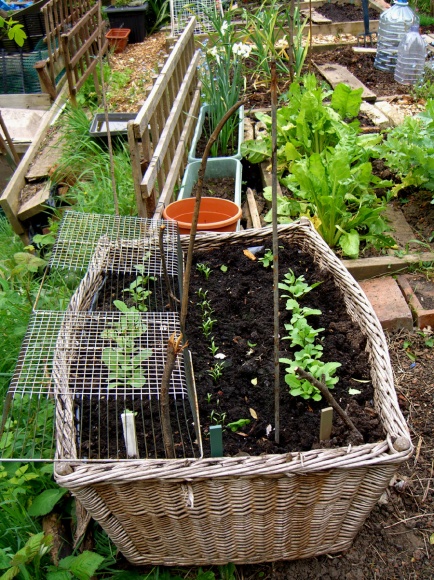 Despite the light drizzle and overcast conditions I gave a little sprinkle of water to all the beds.  Go! Go! Go! to the all the little seeds & seedlings: coriander & radish in the wicker basket, and into the ground beds beet, swiss chard, a ‘wild’ coriander bed.

Also watered the kale beds and tomatoes, which seem to have survived their planting-in.  And the two small strawberry beds.  (Must bring up a bag of rotted straw from the back patch for the strawberry bed.)  And garlic too (for which some of the growth is already yellowing).

The spinach is looking ragged.  I’m going to harvest all the good leaves the next time we visit, and tidy it all up.  They may re-grow, but have been growing all winter so who knows?  As long as it isn’t too hot I’m guessing they won’t bolt.  But that’s for next time… (This time I harvested a handful of sprouting broccoli heads which will make a tasty and nutritious addition to our dinner.  Yum!)

I cleared the side front corner at the front of the holly bush – quite a gain made there.   There was lots of rubble which I’ve collected into a small planter.  I think this will be a nice fairly sunny but semi-shaded area to place a sunken pot large enough for one of the gooseberry bushes. (It’s under the fig at the front and has the large ivy shrub to it’s side and quite tall wild jasmine on H’s side farther along, so semi-shaded and sheltered in all directions.  Perfect for salad / herb beds?)

The peas, as of late April.  With red onion in front.

I cleared farther than our own plot, but mainly for weed control purposes.  (Also on the same thinking did a clear out of weeds – bindweed, grass, feral blackberry and ivy – growing along the front edge by the water pond and the jasmine border along the stairs.)

Progress was made on the shed.  Plastic window on the side sized to shape.  Steady steady – and soon we’ll be done! 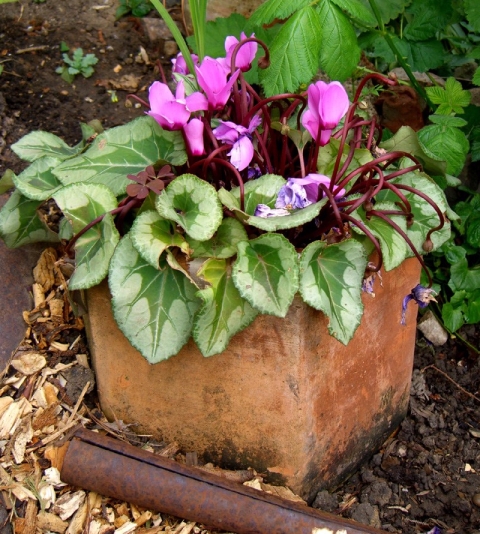 A tumbleweed from Canada who's been living in London for twenty or so years.
View all posts by smallPaws →
This entry was posted in allotment journal, perennials, veg patch. Bookmark the permalink.

1 Response to the sea-holly re-surfaces