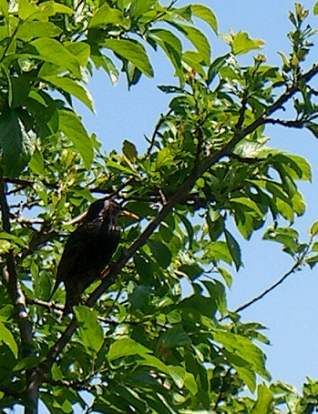 Young starling in the apple tree.

Although the mornings and evenings are cool in this first week of May, the days are returning to heat.  We continue to live a little in fear of frost – which would wipe out our courgette and tomato planted into the garden already – but we live, as always, with wild hopes.

It was hot yesterday, and only a little digging to rescue some of H’s strawberries and replant them in a weed-free bed raised a sweat.

The plot abounded with life.  We spotted a juvenile starling, iridescent in the sun, flitting somewhat awkwardly among the plum and apple trees, picking at bugs around the finished blossom.

There were light blue tiny birds that flew like fighter jets, as well as blackbird and of course, our very cheeky Robin. 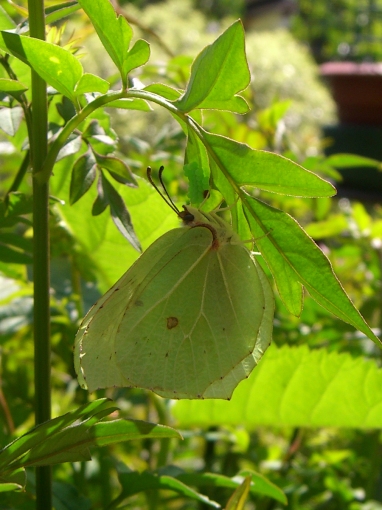 Something that caught the big guy’s eyes was this totally camouflaged butterfly, which took refuge in the jasmine.  We checked online and think this is a Brimstone butterfly.

Everything seems to be growing well.  The perpetual spinach that I direct seeded (to the end of the patch by the red rose arbour) are coming up.

Our winter spinach and swiss chard beds are starting to bolt so that’s soon the end of those crops – but just as well as we’re quickly running out of space for growing!

The broad bean bed is doing well and some very late arrivals are showing above ground which had been direct seeded in.  So we will in the end have all six plants that I seeded into the bed, which has been inter-planted with some sunflower, for colour and height. 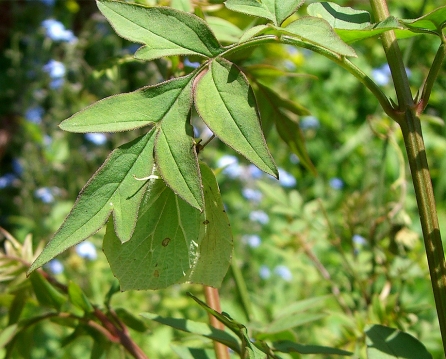 The other bean bed, holding 3 plants of Purple King french beans, are doing well and are kept covered in water bottle cloches to protect them from cool nights.

The pea bed in front of our shack has been a bit disappointing but there is one single plant showing itself, which I’ve also covered for cool nights.  I’ll have to try more pea plants.  I had some in seed pots in the shack but there’s no sign of success there.  I’m starting to think those pressed paper pots are not good to use as they tend to attract mold, which damps off the plants.  As controversial as this sounds, I’m going to prefer growing with plastic trays in future – ensuring to recycle and re-use, of course! 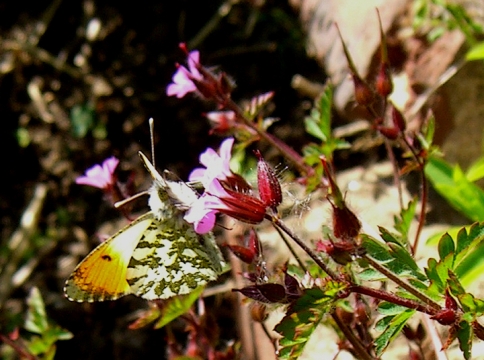 Corn plants, seeded in the shack, have also been planted into the beds, again interplanted with sunflower.

I’ve never grown corn before – this is sweet corn.  The big guy wanted us to grow our own popcorn, of which I’m fairly in favour as we LOVE our popcorn, but I’ve never seen seeds for this, so in the meanwhile we’ll have a go at growing sweet corn.  R next to us grew corn two seasons ago with which he was terrifically disappointed, but hopefully we’ll have better luck. 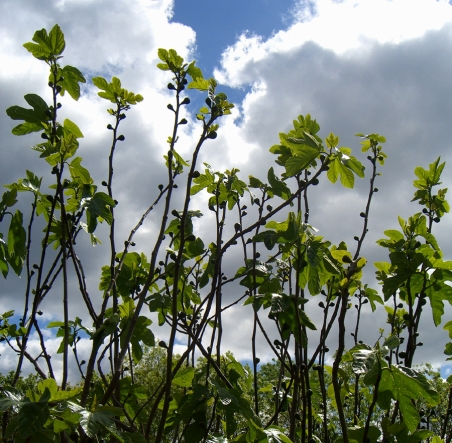 The Fig Tree continues to swell, bud & come to leaf.

Other little tasks taken care of yesterday was to prick out the self-seeded yellow flowering calendula from the cauliflower patch – which I transplanted in part along the front of the raised strawberry bed, to soften the line of the path, and in part onto H’s side – to keep his rescued strawberry plants company.

I had wanted to start more seeds for the shack – but didn’t get around to it as we had to dash back home mid-afternoon in time for me to shadow a staff briefing.  Even though we’re furloughed I’m trying hard to keep up-to-date with work-news so as not to be completely out of the loop when we finally return out of the London lockdown.

A tumbleweed from Canada who's been living in London for twenty or so years.
View all posts by smallPaws →
This entry was posted in allotment journal, diary, veg patch, wildlife. Bookmark the permalink.