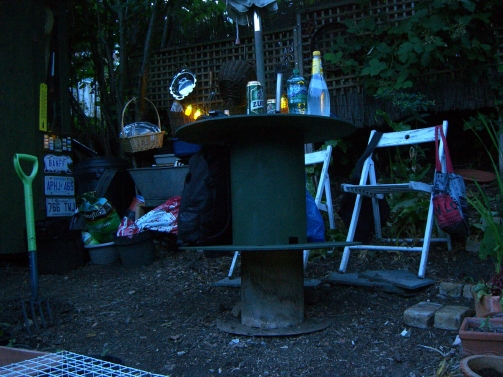 We’ve been down the rabbit hole for the past few weeks.  There has been lots of summer rain – sometimes light showers, sometimes sustained, pounding downpours. And so on the enforced wet days when we couldn’t garden anyway, we got busy inside and painted and redecorated the living room. On dry evenings we visited the plot to enjoy the final fading light of the day.

Much has changed.  Fruit crops have come and gone.  We ate fresh cherries, harvested from the fan-trained cherries growing against the side elevation of our building.

The gooseberries (safely ensconced in their four-poster netted bed) ripened up and turned a rosy red; we devoured them in a delicious crumble – tart and sweet. 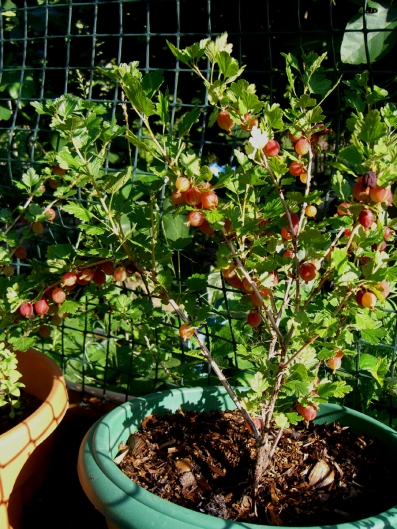 We’ve been feeling like we’ve run out of growing space, so we decided to move the gooseberries to our back patch as they pretty much take care of themselves (once the fruit has been protected from the ravaging birds).  In place of the gooseberry we’ve moved our potted Jersey Blue blueberry to the netted bed.

The two red gooseberry will have company in the back patch as yesterday we were gifted three good-sized healthy berry bushes – two we think are gooseberry and one of the bushes, which doesn’t have thorns, may be a currant bush.  The fruit crops next summer will be spectacular! 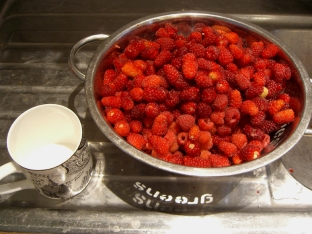 The raspberry and loganberry crops are also coming to an end.  There are still fruit on the raspberry but the loganberries are pretty much finished now.  Next to come will be the blueberry (coming to ripeness now) and also blackberries – of which we’ve already picked a few early ripe berries.  Yum! 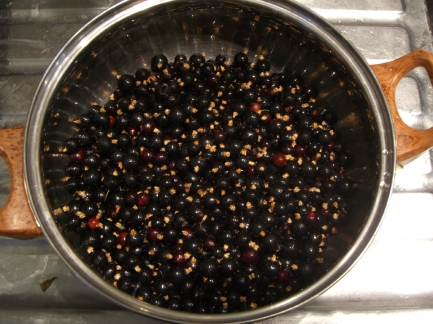 Blackcurrants rinsed and ready to be transformed to delicious jelly.

The blackcurrant bush in the back patch was harvested and a single bush produced just over half a kilo of fruit, which I promptly turned into a delicious blackcurrant jelly.  It might be a lot of effort for a single jar of jelly, but the flavour is intense.  All in all I’m inspired to try to take cuttings of the blackcurrant to propagate another bush or two and increase our harvest capability.

Other crops coming to harvest include our peas and the purple beans – which seem to have been a dwarf type!  We built a wonderful bamboo pole support, but it appears not to be needed.  I’ll try to plant some bean seeds into that bed for a later runner bean crop – on verra!

Radish continue to delight – my top tip is to grow these in planters with soft bagged soil.  We’ve got ours in a repurposed wicker basket (interplanted with lettuce).

Anyway, we’re back at it at the allotment, fine tuning, still planting, moving things around.  I’m going to seed some more salad crops (including more pak choi) to plant in at M’s plot – the big dude created a whole new raised bed at hers, which I’m hoping to take advantage of.

A tumbleweed from Canada who's been living in London for twenty or so years.
View all posts by smallPaws →
This entry was posted in allotment journal, back patch, harvests & feasts. Bookmark the permalink.