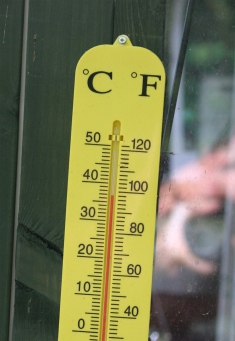 July ended with a mini-heatwave.  We arrived at the start of this week and simply had to photograph the temperature – partly to prove to ourselves it really was over 36º – and this from the thermometer installed on the outside of the shed, which is mainly in the shade most of the day, being hung under the eave of the shed and in the shade of the hazel tree behind.  Yowza it was hot!

Too hot for transplanting or any hard work whatsoever to be fair.  We enjoyed being up at the plot and simply surveying what was going on.

Red Damask Rose back in bloom.  Sunflowers are just starting to flower. 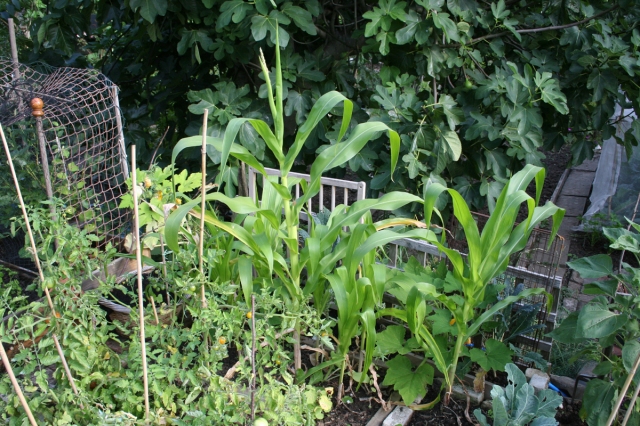 Sweet corn patch, with tomatoes planted in front.  No corn ears yet! 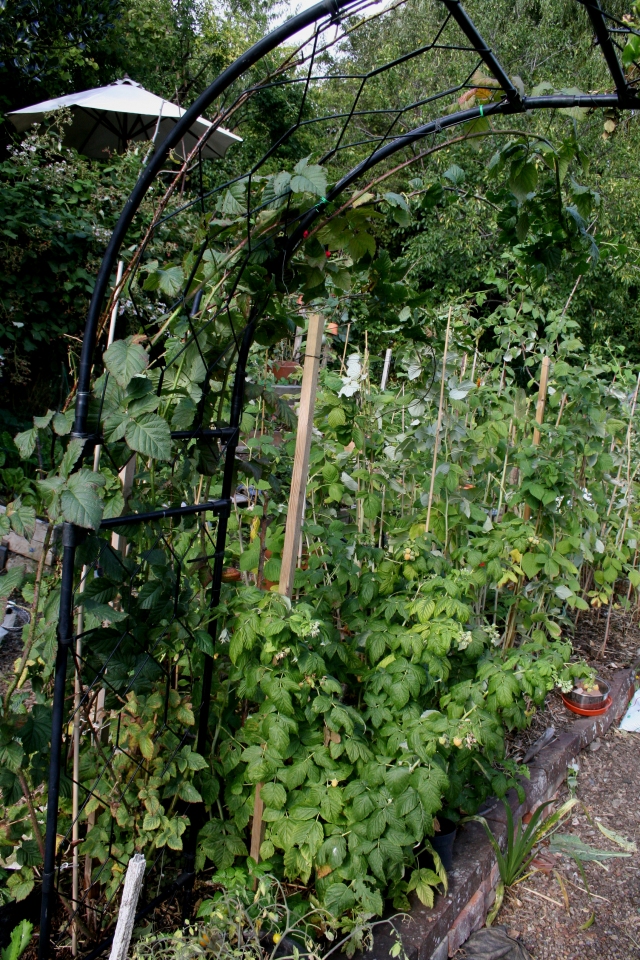 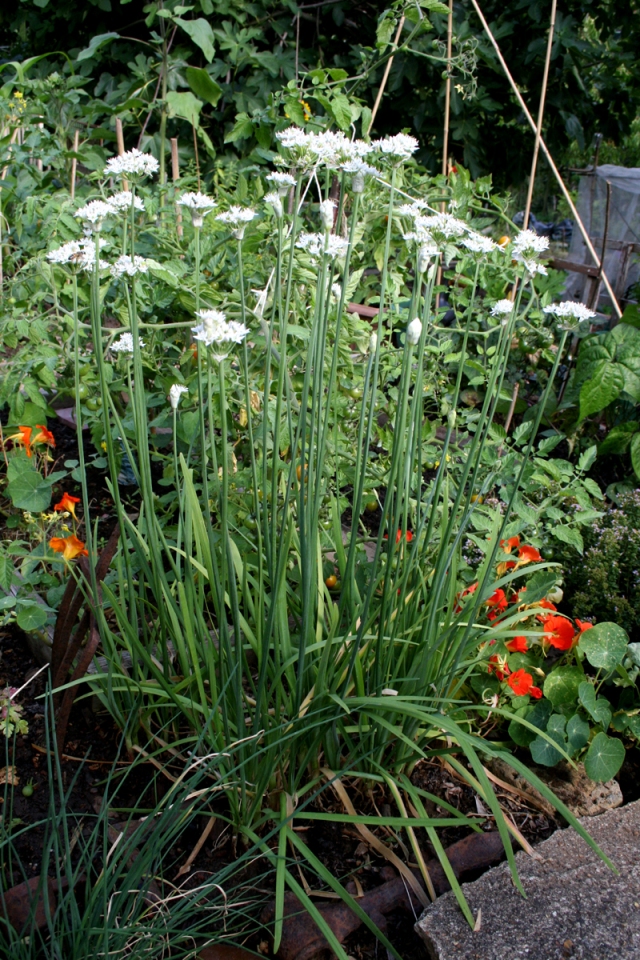 Garlic Chive in flower at the start of August 2020.

Another variety of sunflower.

The harvests continue and though I’m disappointed by the zucchinos, we have had a few of them to add to our dinners.  The same is true of the zucchini – poor fruiting this year, though we’ve had a few fruits to enjoy.  The big guy’s not keen on squashes – all those big leaves and all the space they take just doesn’t seem worth it to him.  And with the poor fruiting and meagre crops this year I’d sadly and somewhat reluctantly have to agree with him.

We enjoyed a second crop of lettuce, and I’ve tried to seed some more.

Finished the broad beans – and underwhelming crop but healthy cheerful plants.  I’ll try to plant some in November and hopefully they do better as a winter crop for early spring harvests in 2021.

The flat leafed parsley I started from seed is also somewhat pathetic – it’s been funny growing this year – spells of sustained rain and cool throughout June, variable weather in July with very hot days but cool nights.

Tomatoes have been a great success and we’ve been eating the tiny yellow cherry tomatoes most of July.  The beefsteak red tomatoes started to ripen in mid-July and we’ve had a slow steady supply of these delicious beauties for the past two weeks.  Blackberries are prolific again this year and we eat them in all ways – in smoothies with yoghurt and bananas, fresh with cream, yoghurt or ice cream, in crumbles combined with yellow raspberry or rhubarb or apple, in jam…

And it’s not just the sunflowers that are enjoying the high summer heat.  We saw grasshoppers on the blackberry. 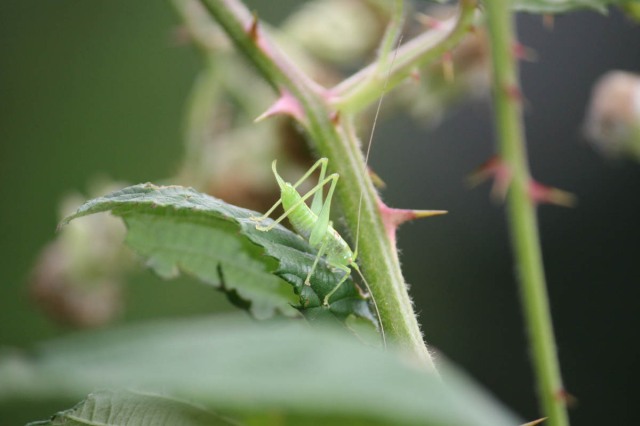 And we met Scarface’s sister.  The big guy saw her squat to pee, so we’re pretty sure she’s a she – and although very similar in size to Scarface (whose nether parts I saw so can verify his maleness), she sports no distinctive U-shaped scar, nor does she have the same undercarriage tackle.  What a cute little vixen! 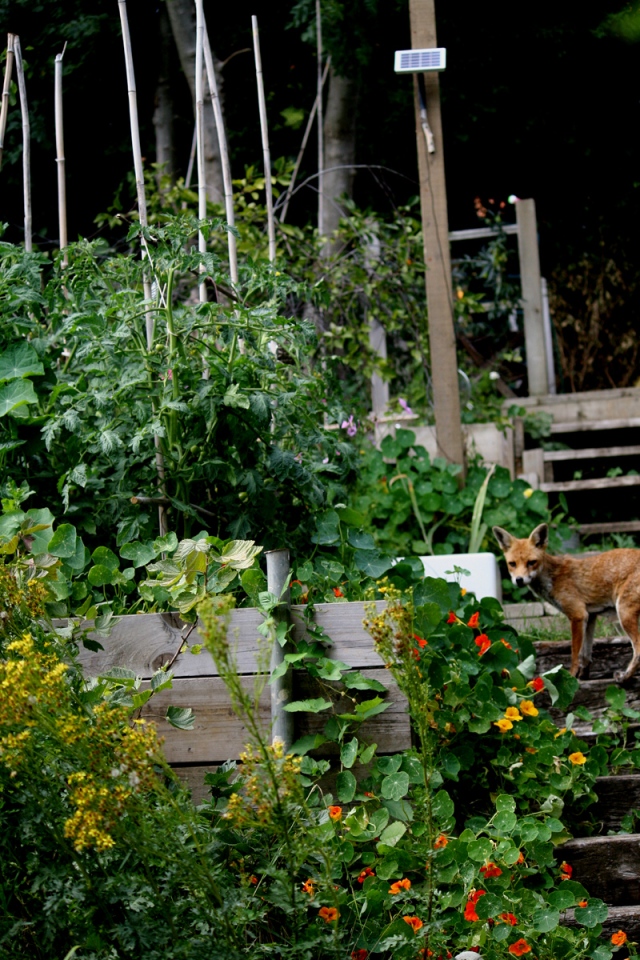 A tumbleweed from Canada who's been living in London for twenty or so years.
View all posts by smallPaws →
This entry was posted in allotment journal, diary, harvests & feasts, veg patch, wildlife. Bookmark the permalink.