Earlier this summer.. or was it spring..?  Probably late May, the big dude did a wander through the plots to the end – looking for foxes and butterflies and what-not – and spied an end plot that had absolutely magnificent Echium in flower.  Think huge spears of flower stalk standing proud at about 16 feet tall – and we’re not kidding!

So later in the summer we returned to request a seedling from the man with the super-plants.

Seems echium self-seed abundantly, and we were gifted with some seeds as well as a little plant that had started on its own. We have high hopes for this little guy.

It was tiny but is now coming into its own and almost ready to be planted out into our new meadow area in the back patch.  It is sure to be a neighbourhood eye-catcher!

And we also started a tray of seeds with lots of grit for extra drainage. (I’m now officially addicted to horticultural grit!  Can’t get enough of the stuff.) 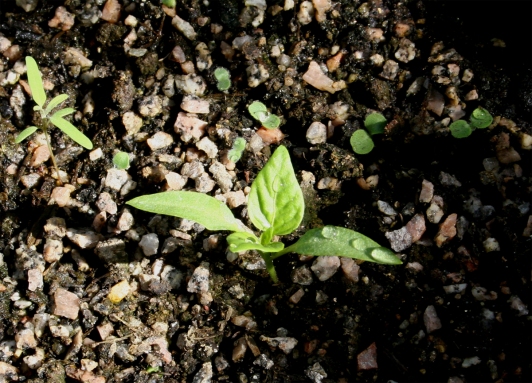 The echium seed tray has also taken off, with one definite contender, and we think we have a few more little echium sproutlings starting up.

Magnificent success with these – but I was much less successful with starting poppies in a seed tray.  None have come up.

Isn’t it strange how wildflowers, which seem to do fine on their own, are often the hardest plants to start by seed and cultivate?  Go figure.

A tumbleweed from Canada who's been living in London for twenty or so years.
View all posts by smallPaws →
This entry was posted in allotment journal. Bookmark the permalink.

1 Response to high hopes for Echium