It’s plum harvesting season on the plots.  We don’t have a tree on our plot, but many others do.

Earlier this summer we harvested greengage plums from the bottom plot we’ve been keeping an eye on for the nice couple that had to head out of town to visit elderly parents overseas.  It was lovely with a golden green honey colour and exceptional taste.  I saved a jar of jam for them so they can at least enjoy some of their plot’s crops when they return to town.

Last week we harvested Victoria plums from R’s plot beside us.  Sadly these were effected by plum worm, but happily I had decided to make a crumble, so halved all the fruit and was able to cut out damage and or discard fruit that was really badly effected.  (Plum worms grow within the fruit rather than burrowing in, so you can’t see the damage from the outside.  An extra disgusting fact is that the grow and poop inside the fruit, leaving black brown tracts all through the flesh of the fruit.)

Yesterday we were invited by another allotmenteer to harvest high-hanging fruit from her tree.  These seemed plum-worm free, so we decided to make Victoria plum jam.  The results were delish and the jam turns a pale rosey pink.  Wonderful beyond words!  Yum.

For details about how to do this in your own kitchen, see my notes on making plum jam on the newly created ‘Witch’s Kitchen’ pages.

Why ‘Witch’ you may wonder.  My beloved maternal grandmother was a very skilled artist and craftswoman, who painted oil and acrylic portraits and paintings, made dolls and clothes and much more for all of her many children and grandchildren. One year she made each of her children a ‘kitchen witch’ – with heads created individually by her out of paper mâché, and then sowed a cloth and batting body, and adorned with unique little doll dresses. 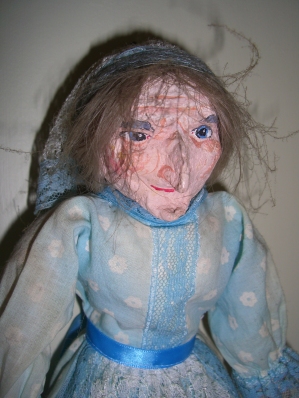 When she had to downsize her house as she was unable to live independently, I was lucky enough to be in Canada that summer and was able to peruse some of her personal effects before they were disposed of.  All of her own sentimental items were laid out in a huge Mississauga basement – it was a sad day for her and I felt it keenly. Incredibly to me, nobody else in the family wanted her very own kitchen witch, which had hung in her kitchen with her through the years. I scooped it up as a significant personal memento.  To my delight her kitchen witch still had it’s little poem tucked into the witch’s apron, written by her own hand.  This is truly a treasured personal item and hangs to this day in my tiny little galley kitchen in London.

I’m a good luck Kitchen Witch, I ride on my broom to bring success to all who work in this room! Roasts won’t burn – Cakes won’t fall – No boiling over – No Boo-Boos at all. With my supervision no disasters to appall!  With my Birks baby knife.

I’m often accused of being a hoarder, but truth be told most of my hoarding is highly sentimental and each item collected evokes powerful personal memories.  An example would be that I still to this day, five decades on, have in my possession the silver Birks baby knife that I was gifted at birth by my godparents and beloved aunt and uncle.

A tumbleweed from Canada who's been living in London for twenty or so years.
View all posts by smallPaws →
This entry was posted in allotment journal, harvests & feasts, recipe. Bookmark the permalink.