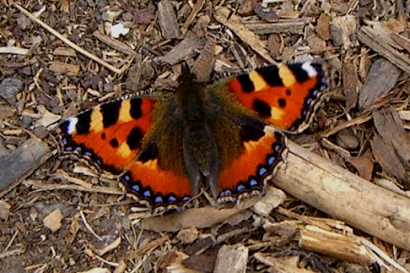 Yesterday was cool and fairly grey.  The winds came down but it was a nippy, unwelcoming day.

After a slow start morning we did a quick tidy in the back growing patch – planting in three new plugs of artichoke into the back corner (where there is presently an onion bed in front of a stand of fairly wild honeysuckle).

Malink sizing up our established globe artichoke in the backpatch.  Yowza!

We also planted in a new bamboo plant (Fargesia scabrida Asian Wonder) – as I decided that instead of buying bamboo stakes a better way forward is to grow a stand of the stuff ourselves.  I wouldn’t recommend a bamboo for a small garden (as it can be invasive), but in the back patch we’re graced with lots of space so I’m not worried about it taking over.  We will have to ensure both remain well watered through these very dry days.  Again no rain forecast for days into the future, so our little London mini-drought continues unabated.

When we got up to our plot we spotted a new type of butterfly on the allotment plot.

We’re pretty sure, after checking the identification guides, that this is a Small Tortoiseshell butterfly (Aglais urticae).

According to the experts,  “Despite being a widespread and common species in certain areas, the declining fortunes of this butterfly [Small Tortoiseshell], especially in the south, mean that this butterfly is a species of conservation concern.” (UK Butterflies).

Tortoiseshells like nettles and are common throughout Great Britain.

Other buzzing beasts abounded too – with plenty of bees of all types and other pollinators alighting onto the sunny patch of self-seeded poached egg flowers which grow along the main allotment path.

Unlike butterflies, which are reclusive and shy, the bees are busy workers and don’t mind an audience and work away through the flowers unperturbed by the presence of a tall, giant camera-wielding man.

A highlight was an early harvest of strawberries, which we brought home for a sweet evening desert.  We’ve been having problems with beasts and birds eating the strawberry harvest before we get a look in.  So we laid out some netting loosely over the plants mid-week.  But yesterday showed continued devastation – despite the netting.  So now we think the damage’s being done by slugs.  After our harvest I sprinkled slug pellets generously over the patch.  Hopefully that solves the problems.

The vase on our little table holds a fully open damask rose.  When fully open the blooms are almost as big as my open hand!

Finally, we added two pots of asiatic lilies up at the allotment.  They’re in plastic pots so we could easily move these back to the flower beds behind the house in the back patch if we wanted.  Our asiatic lilies in the back patch have suffered for the past two years from red lily beetle, so I’m thinking it’s safer to get them going at the allotment. 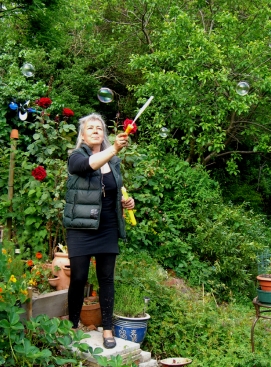 One pot is full of pink ‘Star Gazer’ lilies, and the other pot has a selection of darker toned mixed asiatic lilies called ‘Mysterious Blend.’

Lilies are said to enjoy partial shade, so I’ve placed these two pots into a sunny spot at the top back of the plot – to the side of the new summer shower stand, near to the newt pond.

On the ground at the back of the two lily pots, I sprinkled seed for California poppy, as well as a few coriander seeds.  Hopefully this transforms to a lush little oasis.

A tumbleweed from Canada who's been living in London for twenty or so years.
View all posts by smallPaws →
This entry was posted in allotment journal, diary, wildlife. Bookmark the permalink.