shady spots in the back patch

Under the large cherry tree in the back patch – which stands over 60 feet high and casts considerable shade – we have developed a nice looking flower bed.  Shade under trees makes for really tough conditions as shade almost always also means dry.  Dry shade.  The worst!

A principle of gardening I’ve always adhered to is to make-do with the conditions that you have to deal with.   I guess it’s really that you can amend and improve the ground you find under your feet – but you can’t fundamentally change it.

Sure, sometimes it’s possible to make adjustments – adding manure, adding grit and sand to heavy clay, etc.  But the main bedrock of the conditions cannot be altered entirely – and so it is with dry shade.

And so, for years and years, the patch under the cherry tree was covered in a five inch layer of hay mulch to keep the bindweed and other weeds down.  It was an oasis of golden brown mulch, with almost no growth.

But gradually we’ve planted around the edges of shade and then finally, in under the cherry’s shade itself.  Some of this was intentional – such as planting in three peony, which in truth are always thirsty!  But most of it was ‘lazy gardening’ – simply laying out seed heads to create new wildflower areas when deadheading from other areas of the gardens and woods.  (I did a similar thing this spring when I pulled out the forget-me-not that grew throughout the long flower bed – which has been dumped about under the cherry for next year’s colour.)  And now the entire bed is lush with glorious green growth.

A particularly successful patch in the most adverse conditions this growing year is the large drift of clumps of feverfew.  We have masses of feverfew which are gloriously in flower now and add a frothy backdrop to the three peony planted there.  Their small daisy-like flowers are abundant and create white clouds that twinkle from under the boughs – easily seen and enjoyed from our upper storey windows overlooking the gardens.  Though these self-seed freely, once developed the plants can become perennial and live throughout the winter.  A great feature of feverfew is that it remains in flower for a long time and continues to look ‘fresh’ for weeks on end.  If you trim by half (in other words, cutting that is more than merely deadheading – removing a third or more of growth; sometimes called the ‘Chelsea chop’), the plants will refresh themselves and flower again. 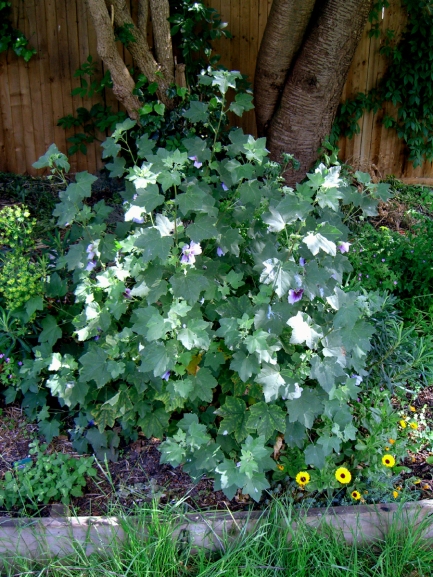 Mallow bush with calendula and catnip planted in front. (15 May 2020)

So the moral of the story is, if you select plants that can tolerate dry shaded conditions, occasionally they can establish and grow happily in the worst of conditions.

And so it was not only with the feverfew, but also with the purple flowering tree mallow, which has been planted directly in front of the cherry tree trunk, and thus in the centre of the  darkest shade, in July 2019.

Hard to believe that we only planted this last summer!  Then it was a spindly six or so inches of branch and leaf.  Now it’s in full flower, already bushed-out and shot-up,  standing as tall as me.

On the sunnier edge of the shade from the cherry is a nice patch of dark heuchera ‘Licorice’- another plant that actually prefers semi-shade and has filled in to create a pleasing healthy looking blanket of purple tinged foliage.  Standing erect above the leaves are the spears for flowering – they will come into flower very soon, revealing small pale pink blossoms.

Someone in the neighbourhood left the standing woven reed crane in the back, so we’ve installed him in the midst of this patch.

A tumbleweed from Canada who's been living in London for twenty or so years.
View all posts by smallPaws →
This entry was posted in back patch, diary. Bookmark the permalink.